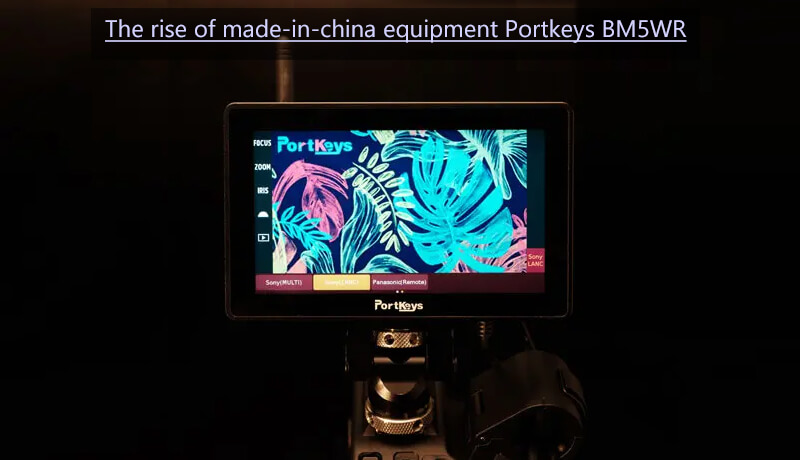 Good Things are Made in China Now

The response to Corona, the uproar over the opening ceremony of the Olympics, and the visible lack of national strength in Japan. I don’t mean to make a political statement, but it is predicted that more and more people will be discouraged by the country they live in, 2021. The feeling that “I can’t afford it because it’s too expensive” in relation to the price set globally by the manufacturer when a camera is released is one piece of evidence of the decline of the Japanese economy. Wages are not rising while prices of goods are rising.

With the increase of instant “video production”, which is a separate axis from traditional “video production”, the production population has increased, but the unit price seems to be decreasing rapidly. Under such circumstances, how long can “Made in Japan” products continue to do well as they have until now? Of course, there are many good products, so I would like to support them, or rather, I would like to do my best together with them.

Now, while I am concerned about our country, what has caught my attention recently is the rapid progress of equipment made in China. DJI for gimbals and drones, SmallRig and TILTA for camera cages, Aputure and NANLITE for LED lights, Meike for cine lenses, and Z CAM for cameras are expanding their user base in Japan.

In the world of photography, most flashlights and strobes are made in China, including Godox and other inexpensive similar products. What do you think? I’m sure you are using one or two of the aforementioned brands of equipment. Many people in their 40s or older, including myself, have the impression that “made in China” means something shoddy, but we all know that’s not true.

However, everyone knows that this is not the case. Nowadays, “good things are usually made in China. This is supported by the fact that an increasing number of people in China, especially young people, are choosing “domestic” products not only for equipment but also for clothing and cosmetics. The days of “cheap is as good as it gets” are long gone, and “cheap is as good as it gets” is now the standard for equipment made in China.

When it comes to external monitors, SmallHD and ATOMOS are probably the two brands that come to mind when most people are asked about them. I’ve used both of these brands, but the one that comes to mind is Portkeys.

If this is the first time you’ve heard of it, please keep it in mind. I met Portkeys by chance and am currently using it in the field. I’d like to introduce Portkeys’ BM5-WR, a 5.5-inch on-camera monitor with a maximum brightness of 2200 nits. It has HDMI and SDI inputs, a single SDI output port with through-out (and LUT on/off), and the ability to power the camera and peripherals from the monitor (see below).

It can also monitor 3D LUTs and output SDI, with a perfect waveform display. It also has Wi-Fi, a built-in Bluetooth module, and a camera control port for camera control. Camera control is supported by Sony and Blackmagic Design (Bluetooth connection), which I usually use, as well as Canon, Panasonic, and Z CAM. Also, RED’s KOMODO can be controlled wirelessly (Wi-Fi).

The detailed specifications can be found on the BM5 III WR, but the price is only about 749 USD for all the convenient features. Of course, you can find cheaper on-camera monitors, but this is a great price for something that can do so much. LANDSCAPE (Tokyo/Osaka), a hotspot for cutting-edge video production equipment, is the distributor of this product in Japan, so the support is perfect. It’s also great to know that you can use it with peace of mind.

Manufacturers and types of cameras that can be controlled. The connection method and settings are different depending on the manufacturer used, so please check.

As mentioned above, the BM5 III WR has many functions. However, the operation is quite simple. Tap once to display the icon, and then swipe up, down, left, or right to change the menu that can be operated. For example, tap once and swipe left to set the display settings, right to set the screen display settings, down to control the camera (zoom, exposure, and REC), and up to control the focus (with TILTA’s Nucleus-Nano, see below). (When combined with TILTA’s Nucleus-Nano, as described later, you can control focus on the screen.

I recommend setting the sharpness to the highest value so that the focus position can be recognized more easily than using focus peaking. Please try it!

2: Image settings (swipe to the right)

You can set your favorite things such as Parade, Histogram, Vector, False Color, Zebra, etc. to turn on/off the display.

3: Camera Control (Swipe to the bottom)

Camera control screen. The items can be controlled depending on the camera and the setting method.

For example, select Iris, adjust the aperture with the left and right keys and record with the REC symbol.

Here is one example of how to connect the camera control with FX6/FX3 (α7S III). This is because there are two types of Sony cameras, one is operated by LANC and the other is operated by USB multi.

In the case of the FX6, connect the CAMERA REMOTE terminal of the BM5 III WR via LANC and select Sony (LANC) for the BM5 III WR. That’s all you need to control most of the cameras on the BM5 III WR. Being able to control the camera on the monitor is very helpful, as the FX6 is quite difficult to operate quickly. By the way, the “ZOOM” item is there to activate the super-resolution zoom if it is set to ON.

It is hard to see in the picture, but it is connected to the LANC.

When you use FX3 or α7S III, you need to do some detailed settings. First, you need to turn off the USB power setting, connect BM5 III WR with USB multi-cable, set BM5 III WR to Sony MULTI, go to MENU, set Network->PC Remote to “ON” and set PC remote connection method to USB.

I installed the BM5 III WR on my FX3 (with the TILTA cage). The BM5 III WR allows me to control the camera from the monitor, making it feel like a RED camera.

FX3 with Nucleus-Nano (with TILTA cage). Cine lenses are Meike’s full-frame lenses, which are rapidly gaining popularity for their excellent image quality despite being inexpensive at 100,000 yen per lens.

Actual motion in the movie. Smooth.

As mentioned above, by connecting the BM5 III WR to TILTA’s Nucleus-Nano with the supplied cable, you can control the focus with the touchscreen of BM5 III WR monitor. The horizontal axis at the bottom of the screen is the focus meter, which can be manually controlled by dragging your finger. In addition, it is possible to set point A and point B and move the focus between them automatically at any time setting. This will be a great help in small group operations.

The value of Nucleus-Nano is further enhanced by the ability to set two focus points and auto-focus between them at any given time.

A TILTA cage that makes “such-and-such a thing” come true.

For those who don’t know, I am a TILTA ambassador. TILTA became famous with the BMPCC4K cage and the Nucleus-Nano wireless follow focus. They have been proposing cage systems for various cameras including Sony, Canon, and Panasonic.

Although TILTA is a third party product, it gives you a sense of unity with your camera as if it were an official product, and when you hold your camera in your hands, it makes you wish you could do such and such. In this article, I would like to introduce the FX3 and FX6 cages. Not only are they well made, but there is also a kit that allows you to use a V-battery with the FX6, so you can escape the curse of the stock battery and power your peripherals smoothly from the D-TAP. This is a highly recommended product.

TILTA’s FX3 cage kit. It can be used as a full cage, but the half cage as shown in the photo is more convenient by default.

The top handle can be rotated by pushing the button in the middle. This is a very useful feature when shooting vertical video.

The BM5 III WR can be made into a full cage by adding parts on the bottom.

When the BM5 III WR is converted to a full cage, screw holes are added on the side of the grip, which is convenient for attaching peripherals. The grip can be attached optionally.

Also, an 8mm rod can be attached, so when using a cine lens, a follow focus can be mounted on top.

By the way, the top and sides are NATO compatible, so you can attach other companies’ NATO type top handles or TILTA’s NATO type side handles.

The value of the FX6 goes up a lot just by being able to operate a V battery. If you have FX6, you should install this kit. If you are thinking about purchasing FX6, Camera Cage for Sony FX6 Vertical Mounting Kit is a must-have item. You can customize it to your liking without full equipment.

The BM5-WR from Portkeys can be controlled by LANC connection, and the FX6 can be connected to SDI, which is also a nice feature. If you are using V batteries, you can power the BM5-WR with the included D-TAP to 4-pin connector cable. It is very helpful to not need a battery for monitoring.
The standard is to make “ease of use” by yourself (and Chinese equipment).

Actual use in vertical shooting

When shooting in horizontal position, SDI output to Mars

Camera control with a touch of the monitor

The BM5-WR is also very useful when using the FX3 or α7S III, which can only display a histogram. As you can see in the photo, the SDI through-out output from the HDMI input is connected to HollyLand’s Mars and wirelessly sent to the SUMO19 for monitoring. Hand-held shooting and cable-less previewing is a great way to improve efficiency in the field.

The gimbal is a DJI RS 2 with TILTA dual handles for ease of use, and all lighting is provided by NANLITE LEDs. I don’t know about you, but I’ve noticed that most of the camera peripherals are made in China. I don’t have that much nationalism, but it makes me wonder if Japan can’t try a little harder.

RS 2 features TILTA’s dual handles for improved operability
In a sense, there is a tendency to leave this to the Chinese manufacturers, but I think that many things would be happier if camera manufacturers could better understand (imagine and create) what we, the users, find convenient, rather than seeking cheapness in the first place. Good luck, my country. Every day, I use convenient and good things while thinking, “Good luck, Japan. Good things are good. That is justice.

The photo shows the Forza60 and its dedicated spotlight mount PJ-FZ60-19.

NANLITE products that are small but have powerful light output

The high-power Forza500 and rectangular modifier

A graduate of Nihon University College of Art’s Department of Cinema Studies “Acting” course, Yusuke Suzuki is a filmmaker who is good at talking. His specialty is “drawing people”. His main work is in advertising. He is also active as a seminar lecturer and video consultant.
Writer List